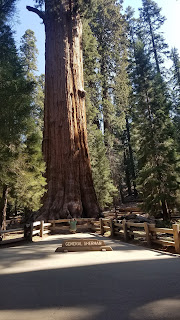 Though our time was short in the park we tried to pack in as much as we could. We were extremely lucky to have arrived to the park on a Sunday night and leaving early Tuesady morning. On the weekends the park closes several of the park's roads to park shuttle traffic only. But since we were there on a weekday, the park was not busy and all roads were open to private vehicles.
We traveled down to the Giant Forrest and parked at the museum. After talking to a ranger in the museum we determined we would take the shuttle up to the General Sherman trail then connect to several other trails and make our way back to the museum.  The hike would end up taking 2.5 hours.
The General Sherman trail is a very short and crowded trail showcasing the largest tree in the world. It is extremely difficult to take pictures without others in the background. The area is small and everyone is trying to get pictures by the General.
After taking our pictures of the General we connected to the Congress Trail then to Alta Trail until we made our way back to the museum. The trails are well traveled and even though we visited during a less busy weekday, we were never alone very long on the trails. The hike is easy walking with most of the trail on level ground. The trial ends back in front of the museum.
Since we visited on a weekday the Tunnel Log and Moro Rock road were open to private vehicles. During weekends the park shuttles are only allowed to travel to the road. Though the site are crowded and small areas they shouldn't be missed.
We got up early to hike the Tokopah Falls trail the morning of our departure. Again the hike is mostly on level ground. Since it was mid-June there was still lots of snow melt and the springs were full and flowing heavily. There were several stream crossings that required some agile footwork to cross and avoid getting  one's shoes wet. Going so early in the morning the trail was empty of other hikers. A mile into the Forrest towards the falls the trail surroundings become a more natural and raw environment. Walking that far back on the trail it felt like a bear or other wildlife could easily walk down from trees and join the morning hike. It was beautiful and eerie at the same time. 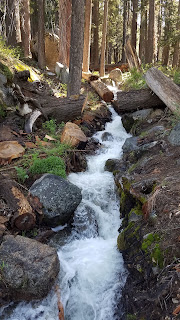 Closing thoughts on the park are that though it is fairly small the park was well worth the few days we spent there. Generals Highway is difficult to drive from the south to the campgrounds. We exited the park from the north and had a way easier drive. Sites in the campgrounds are small and difficult to back campers into. The weather was chilly even in mid-June. We had to turn our furnace on. We did find snow still on the ground in a few places. 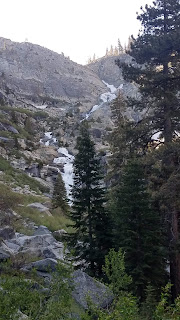 The park is connected to Kings Canyon National Park.  If we would have had more time we would have enjoyed spending some time exploring this park.

June 07, 2020
Well, it's been a while since I wrote an update. In the beginning the changes were fast and easily noticeable. I think we have now reached our plateau. It would be hard to keep writing weekly updates as there aren't many changes from week to week now. I may continue with monthly updates instead.  Labs are prone to bad hips and lose some of their mobility as they age. I watched the loss with a previous lab we owned and eventually he had to be put down. He was 16 years old but his mind was still viable. Putting a dog down who stills understands what you are saying but lacks the ability to even stand anymore is one of the most heartbreaking things I have ever done. Experience is key in life! After we went through it, we made a decision to do the things needed to alivaite some of that pain and suffering for our next dog. No matter the cost! I remind myself, I went and chose Josie, she didn't come pick me out. I owe her the best life I am able to emotionally,  physic
4 comments
Read more

April 05, 2020
My dog Josie is a 7 year old lab that has started showing her age.  Within the last year after we would go for long walks she would spend the rest of the day laying around sore and tired.  She showed extreme discomfort.  She would want to jump up places and lack the ability to do so.  Her level of play had decreased tremendously.  Her mind would want to run and play fetch but her body would tell her otherwise.  Just after a few rounds of fetch she would retrieve and walk to the door telling us she was done. A week ago we decided to try something new for her.  We have some family that runs a CBD oil shop.  After consulting with them and doing some research on our own, we decided this was worth a shot for our Josie girl.  Though we have only given Josie the oil once a day for a week, I want to say we have seen small changes in her mood.  I want to keep an on going journal of her progress as we try this CBD oil out.  After week one: She shows signs of discomf
10 comments
Read more